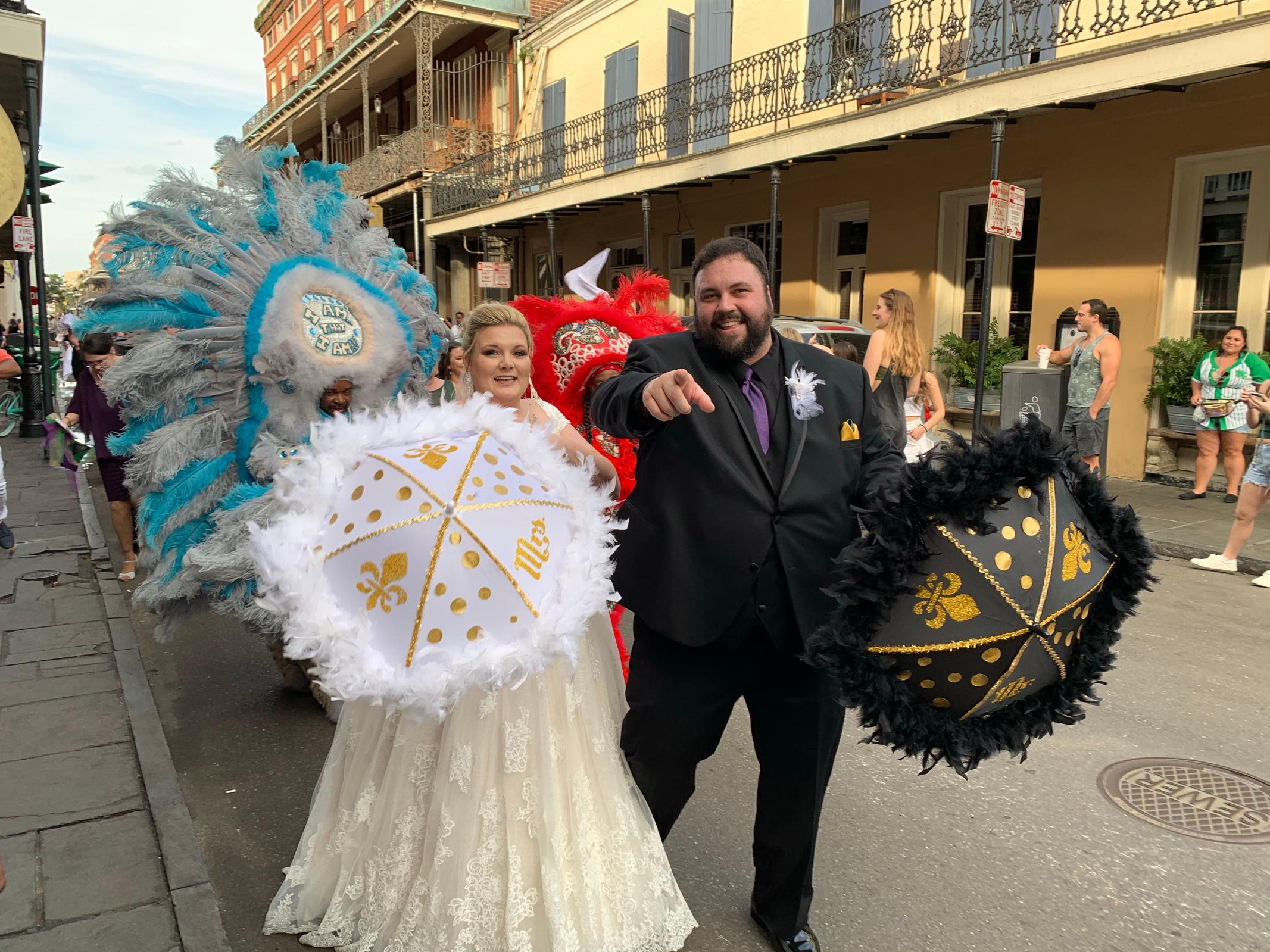 DANCING in the STREETS of the CITY

For more than a century, locals have been parading and dancing in the streets of New Orleans for a wide variety of reasons. This tradition was birthed in the Black communities in the late 1700s, following life-death-burial rituals from Africa. The jazz funeral and second-line are the original purposes of the streets parades that are so very popular. Now days, with a brass band, some people, some money and possibly a reason, anyone can have there very own STREET PARADE. And The New Orleans Music Company specializes in producing STREET PARADES for weddings, matrimonial engagements, anniversaries, birthdays, bachelorette/bachelor parties, conferences, conventions, private events, divorces, funerals or JUST BECAUSE!

WHAT IS A SECOND-LINE? In New Orleans vernacular, it means Buck-Jumping, or dancing for the celebration of life. Second-lining is considered “the quintessential” New Orleans cultural performance art form. A brass band hanging on the corner waiting for the parade to begin. Our DJ Truck “Lil’ Whoodie” blaring some booming beats while folk enjoy a few cold brews. A few hand-decorated parasol twirls. An excited group of partiers behind the band waving handkerchiefs to the beat of the drum, while our sharp dressed Grand Marshal (dancer who leads the band) in a snazzy suit and fedora hat leads the way, dancing, as he waves his feathered fan. Lucky you. You’ve just stumbled across a New Orleans second line. Or if you’re lucky, we’ve just described your very on second-line STREET PARADE, with The New Orleans Music Company!

Love is a abundant and we all need a reason to simply celebrate LIFE! The pandemic caused so many couples to postpone their wedding celebrations. Well, The New Orleans Music Company loves weddings and we’re excited to be ReDefining How WE do New Orleans SECOND-LINES and STREET PARADES! This is how WE rolling, literally. Our newest NOLA DJ Truck “Lil’ Whoodie,” Mahogany Brass Band, bubbles and a cooler of wine/cold beer🍻for the bride, groom, wedding party, birthday party, bachelorette/bachelor. You can also add a Grand Marshal, Mardi Gras Indians, stilt walkers, costumed revelers or additional cultural performers. We ‘re here to assist you in having your very own STREET PARADE for any reason. Reserve your private New Orleans street party today!

Weddings are the ultimate representation of love and happiness. Second-lines are a popular tradition among New Orleans weddings to signify the beginning of a new life together, while letting the entire community experience the love by being a part of the celebration. So, yes, a STREET PARADE through the streets of the city is the ultimate celebration in New Orleans. With the innovation from Dr. Brice Miller, wedding second-lines burst into popularity during the early 2000s when Dr. Miller and his Mahogany Brass Band began organizing brass bands specifically for destination weddings. Prior to Hurricane Katrina, The New Orleans Music Company provided more wedding second-line services than any agency in New Orleans.

As it is a celebration, the second-line brings the wedding guests and bridal party either from the ceremony to the reception, ends the reception or sometimes happen in the middle of the reception. The newlyweds lead the parade, umbrellas in hand, while the wedding party and guests follow the band with handkerchiefs. For more information on how to arrange a second-line for your wedding, matrimonial engagement (anniversaries, birthdays, bachelorette/bachelor parties, etc) let The New Orleans Music Company guide you through the process.

Our services/packages are the MOST AFFORDABLE and the MOST EXPANSIVE.

Comedian Hannibal Buress’ routine about how he organized a New Orleans second-line parade for five of his friends for $300 has been viewed millions of times. His routine is funny, but that $300 he mentions surely only covered the city parade permit and one police officer, LOL! “I advise potential clients all the time, you get what you pay for, so if someone quotes you $300 dollars run fast,” says Dr. Brice Miller, Founder of The New Orleans Music Company. “May it be a wedding, birthday or whatever reason, these events and life moments are important, so you don’t want to be wearing a $9,000 Vera Wang dress and three ragtag guys show up with instruments… The Knot or Wedding Wire don’t even have $300 entertainment services,” Miller said.

What are cost considerations, not including entertainment services? According to the City of New Orleans:

“In New Orleans a Parade Permit, Police escort and City Permitting tax/fee are required for any/all events parading in the streets… street parade permit must be submitted at least 15 days prior to the event, but the City of New Orleans recommends filing 90 days in advance.”

A parade permit is $200.25 ($100.25 for nonprofits), minimum escort fee is $384.97, but maybe higher depending on the length of the route and the parade elements (pyrotechnics, for instance). For parades with fewer than 200 participants, two officers (usually on a motorcycle) are riding first, and a squad car rides last closing the parade. Most parades will be required to have four police escorts, which means more money from you to the city. Your second-line parade can be the traditional style where we parade you through the streets of the French Quarter or wherever you’d like, or can be held off the streets where you don’t need a permit.

REPEAT –– You don’t need to get a permit for indoor or off street parades or “sidewalk” parades nor parades with less than a certain number of people. The New Orleans Music Company can help you avoid some of the City Permitting cost mentioned above. Let’s talk about it!

Add any or all of these unique and fun entertainers to your second-line street parade to get the most of the real New Orleans cultural flair!

WE ARE THE SOUL and SOUNDS OF NEW ORLEANS!

☎️ TALK TO US. Let’s Make Some Soulful MAGIC HAPPEN! BOOK YOU SOME ENTERTAINMENT TODAY!